As Viktor lifted me off the ground, I closed my eyes.

I could hear the screams of the swords that Hugo, Olivia, and Remus were wielding as they slashed through the large carnivorous plants that had been scattered throughout the area.

"Don't worry, Erica, you won't be hurt because I'm just here to protect you," Viktor said to me, and I understood what he meant.

I felt relieved after hearing what Viktor had to say. I'm not sure why, but I have no hesitation in believing him when he tells me that I'm safe with him.

"Faster! There's a bridge that connects the two sides!" Hugo yelled something, which I overheard.

I didn't know where we were going as long as we were away from carnivorous plants, which was all I cared about.

Viktor seemed to be lowering me to the ground. When I opened my eyes, the only thing I saw was his face, and that was enough for me to calm. 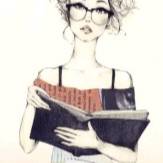 PrincessBlack
where is the update? will you please update it as soon as possible?
VIEW ALL COMMENTS