"Get out of here Ashton. I will never accept you, I don't have a gay son!" My dad yelled, I almost struggled to pick up my discarded clothes that my dad throw at me. My mom could do nothing but look at the tragedy that befell me. I prevent my tears from dripping but the pain on my chest is so heavy that I can't help but cry. My dad just kicked me out and I don’t know where should I go now. I'm only seventeen and I just finished junior high so I definitely can't get a job to support my self.

"Dad please," I beg but he just kept throwing away my clothes, I gather all the things my dad throw and put it in my bag.

"Leave Ashton, you can only come back here if you are no longer gay." Daddy shouted at me and slammed the door shut, I knocked a few times on the door but it seems like they’re deaf, they won’t open it. I sit on the stairs with my hands on my face, feeling betrayed by my parents and defeated. How could they do this to me? How did they manage to get their child kicked out of the house? Maybe they don’t care about me anymore.

I took out my cellphone and called Seb, I smiled bitterly as I wait for Seb to pick up the phone. Seb is the reason why my parents kicked me out because they saw me worshipping Seb's body like he's some kind of greek god.

After a while, Seb answered the call.

"What the fuck, Seb!" I shouted on the other line even though I knew he would not hear me. Just my luck, where am I suppose to go now? I can’t rely on Seb anymore to shelter me, because obviously, he is having fun with a woman which I think he also met on alter.

"Shit!" I cursed while gritting my teeth out of frustrations. I heaved a sigh as I was trying to think for possible solutions to this mess that I’m in. Fuck them all! Fuck Seb and fuck my parents for not accepting me.

A moment of silence enveloped the surroundings when suddenly my phone beep, someone messages me on twitter. And as if on cue, a brilliant idea comes to mind. I thought that I would just post on my twitter account for someone to let me sleep in their house for a night and they can have me in return. But what about the next few days? I have some savings somehow but if I rent a dorm or an apartment I may not be able to eat anymore. I’m scared, I don’t want to leave this house, I’ve been living here my entire life.

I was just sitting on the stairs silently crying when the door opened again and my mom shows up. She hugged me and handed me some money.

"Leave Ash, your dad is really angry right now, I’m afraid he will do something bad to you if he finds out that you’re still here." Mom said while crying and gently pushed me, I hate the feeling of my mother pushing me out from the house but I don’t have a choice, my sexuality can’t be fixed because in the first place there's nothing wrong with me, this is who I am.

I took a glanced at our house for the last time, I guess this will be the last time I would see this house where I spent most of my happy memories, because no matter what I do I know I will never change. My family has rejected me. I'm on my own now. It's not my fault if I was like this, is it? We did not choose it.

Looks like I don’t have a choice but to ask for help on my alter account. I need shelter even just for tonight. I took out my cellphone and immediately opened the twitter app and composed a tweet.

'Hey! Who's up now? I just need a place to stay tonight. Near Harbor, you can do whatever you want to me. DM me if you're game. '

Ever since I was young, I dreamed of being a porn star, I don't know but it feels like a calling for me. But of course, because I was in a country where prostitution was illegal, I did not pursue this kind of job but I have an alter account on twitter where I post pictures of me wearing only a boxer briefs and sometimes completely naked with my face covered with a sticker to hide my identity. I even dared to post a video of myself jacking off and everyone loves it, they even begged me to post more jack off videos.

"Are you going home Zie?" Jowem asked as I was about to enter my car, he bites his lips as if seducing me but I just smirk at him. He’s sexy and hot but not my type. He’s too manly for my liking, tho I know that he’s a bottom. He offered his body to me too many times I lost count, I gave in eventually but it was just a blow job and nothing more, now he keeps on bugging me to fuck him which I always declined.

"Ah, yes the show got me so tired," I said in monotone to let him know that I’m not in the mood to talk to him.

"Um, someone’s picking you up? Do you want to ride with me?" He suggested but I just smiled at him and slowly move my head rejecting his offer. Is he blind? My car is just right here beside me.

"Thank you for your generous offer Jowem, but I bring my car," I answered and open the door of my car. I did not wait for his response and immediately get inside the car where Stuart--my driver, is waiting for me. Well, Stuart is not my driver, he’s a special agent from PMA and I hired him as the head of my security. Aside from modeling underwear, I am also the CEO of Mendez Publishing Inc.

"To the penthouse, Stuart." I said as soon as I get in the car, he just nodded and immediately started the car engine.

We were already in the middle of the trip when the traffic was getting congested, so I immediately told Stuart to look for an alternative route so we could get to the penthouse more easily. Moments later the car turned and I spot a sign beside the road with the word ‘One Way’ written on it. I leaned my head against the car's headboard and closed my eyes to have a nap.

I suddenly woke up when I felt a series of vibrations from my pocket. I immediately pulled my cellphone out of my pocket and a lot of emails popped up in the notification tab. I opened the emails one by one, I skipped the less important ones and focused on the important mails.

'Hey! Who's up now? I just need a place to stay tonight. Near Harbor, you can do whatever you want to me. DM me if you're game. '

Attached to that tweet was a photo of a naked man, with a large emoticon glued to his face so that no one can recognize him. This man on the photo is exactly my type, he has a twink body. He has a good body shape and his skin is like the skin of a months-old baby, smooth and clean.

If I hadn't been tired now I would have sent a direct message to @ashtonxxx, but because I wanted to rest I decided not to drop a message in the account. I just went to Ashton's account first, I think this is his name, and I pressed the follow button and turned on the notification to notify me in his next tweets. Of course, I will not miss him, maybe next time I will invite him because based on his tweets 3 hours ago there are already many public messages here accepting his invitation.

It took me a few minutes to scroll around my alter account until my hands get numb so I turned off my cellphone and put it back in my pocket. 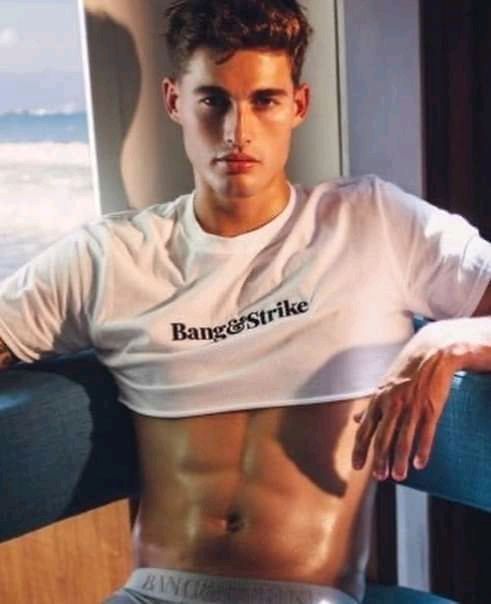 Joyce Agdeppa
So I like your story? it has unique plot i guess? I
VIEW ALL COMMENTS