"SORRY, Madam. Just like what I have told you, there&rsquo;s no more room available. We are always fully-booked during peak season."

Astrid closed her eyes and massaged her temple. She looked at the clock on the wall of the reception area and when she realized how late it was, she lost all hope.

"Madam, you should have done your reservation at least a month beforehand, especially during summer," stated the receptionist with 'Jenny' written on her namepin.

Of course she knew that but she had no choice but to take the risk. It was the sixth hotel she went to that night and unfortunately, each hotel was fully booked, just like this one. She also mentioned that to the receptionist but she just received a fake smile.

"Oh, Madam, it's going to be really hard for you to find a hotel room or even a transient house because just like what I've told you, it's peak season, Madam."

Oh yeah, she already knew that and she didn&rsquo;t need to hear it again, Feeling sorry for herself, she put her bags on the counter and just hopelessly stared at her phone.

What now, Astrid? If she could only scream and take it out on someone, she definitely would. Ah, why did she ever think of going to Baguio without any plans whatsoever? No hotel reservation, no clothes, no nothing except for her shoulder bag containing her phone, wallet and a few personal belongings which won&rsquo;t help her find a place to stay.

"This is all your fault, Josh, this is all you," she whispered to herself while busy reading the text message that got her into this mess.

Because of a single text message from a friend, she found herself inside the bus to Baguio. If not because of her cheating boyfriend, she wouldn't dare set foot on this place. There's a lot of things going on inside her head - her dying career, her parent's dying marriage and now, her unfaithful boyfriend whom she thought was the best boyfriend she's ever met.

Josh is in Baguio, with Ellen.

Josh met Ellen at the call center where he currently works as a manager. She was smaller than her but yeah, prettier. She&rsquo;s somebody who she never thought could be a threat. After all, she's a shy, quiet woman. Ellen is harmless, she thought.

But Astrid was dead wrong.

It has been months since she's been hearing about the budding closeness between Josh and Ellen but as a good girlfriend, she brushed it aside. She loves Josh and she's certain that he loves her with all his heart and she believes that what they have is forever. Josh is smart, funny, good looking. He was almost perfect, just like what his parents and friends always say. And for almost two years of being together, she hoped that he would soon offer marriage.

But instead of marriage, he asked for a 'cool off'. Yes, cool off. Not a breakup, but just cool off. He said he needed space, that he needed to find himself. And since she loved her boyfriend so much, she willingly agreed, with the hope that he'd come back. She remained positive, thinking that probably, he's already thinking of proposing to her and that he just wanted to make everything perfect for both of them.

But his plan was far from her dreams. It's just been a month since he asked for 'space' and there he was, in Baguio on his birthday with another woman.

She couldn't remember what time she arrived at the bus station that night. All she knew was that she has to see Josh right away, wherever he was. According to her best friend Martha, who told her about her boyfriend's affair, he's staying at the Azalea Hotel, with Ellen. She went there and looked for him but she just ended up disappointed because Josh had already checked out a few hours before she arrived.

She's not really used to drinking but out of desperation, she went to the bar earlier that evening and drown her sorrows in alcohol. Well, not really because she&rsquo;s not used to drinking. When she first tried to get drunk (also out of love), she fell asleep in a chair at the bar, only to be woken up by a waitress the next morning. The second time, she slept in a stranger's house. And the third and last time she got drunk, she almost had sex to someone she didn't even know.

So she promised herself to never drink again. But then, she had to break her promise just for tonight. Because she needed it to think about the next step to take.

If only she could meet a good Samaritan who'd adopt her even for just one night, she'd be the happiest. Because she's certain that she had nowhere else to go during those wee hours. Going back to Manila is not an option because aside from the fact that it isn't safe, she couldn't face his parents once they found out what really happened.

Astrid looked up at the man slowly, who's in front of her now. And she was right - it was that guy from the bar, the one with many names. He smiled at her as he stared at her. He was wearing the same jeans he was wearing earlier but instead of the black jacket, he's now wearing a hooded denim jacket over a casual white shirt. It was obvious that he had just finished taking a bath because her long hair was still soaking wet. 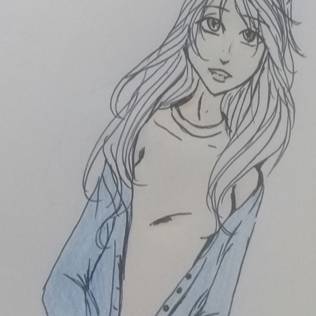