I watched as the large men left the little cabin, leaving me alone with the doctor. He had a kind but withered face and a curious look in his eyes. He scrutinized my body from top to bottom before furrowing his brow.

I looked at him in astonishment and wondered what to do.

“Do I need to answer that?” I knew for a fact that there would be only one half-breed running from their pack with my name. The moment I said my name, they would know how to look for me.

“I was going to put your name on the medical chart for my benefit, but no matter!” he chirped.

“Your name has nothing to do with your health, so I will give you a temporary name to distinguish you.”

He hummed and looked around the room, searching for an appropriate name. I felt a pang of gratefulness at his understanding.

“How about I call you ‘Lemonade’?” he asked after a while.

“Lemonade?” I whispered, shocked. That didn’t sound much like a name.

“I couldn’t come up with anything fancy. I had lemonade in the morning,” he said sheepishly.

I tried to show him a small smile but failed miserably in my nervousness.

He watched my expression for fear before looking down.

“Now that the men are gone, let’s go over your medical history, shall we?”

I nodded. While I didn’t trust these people completely, I knew there was no escaping this situation. I could only guard against so much after being caught by the pack protectors.

He looked up again and nodded before scribbling it down.

“Have you had your first heat, yet?” I, obviously, shook my head. “Are you sexually active?” I shook my head again, this time, my cheeks reddening with embarrassment. He didn’t even spare me another glance. He put his chart aside and scooted closer to me slowly.

“Okay, I will need to check your vitals and take a sample of your blood. I will keep asking you questions as I run the rests. So treat it as a conversation and don’t be too nervous.”

I hummed and allowed him to put one of those machines that take blood pressure on my arm.

“You know, when I was going to school, these were becoming popular. I know there are fancier ones available these days, but I prefer these,” he said calmly. As the tightness went off, the doctor furrowed his brow. “You have very low pressure according to your age and species. Have you always had a problem with this?” he asked.

I blinked. “I don’t think I have had a checkup before.” I paused. “Not to my knowledge,” I amended quickly. I could see the flash of sympathy in his eyes. I chose to ignore it for my own pride.

“I see,” he mumbled before putting his stethoscope on and checking for the heartbeat and the condition of my lungs. Then the penlight checked my eyes and throat and nose. For the next fifteen minutes, I found out a lot of things about my body.

Apparently, I was severely malnourished, had anemia, and a plethora of other diseases which he said should be minor but together, were pretty deadly.

“Little girl, you are lucky to have found me. I am a good doctor, so I can get you up and running in no time,” he said with a toothy smile.

He nodded sagely before guiding me into a separate room.

“You will get a full-body scan here. I just want to check everything inside is running as usual,” he informed me quickly.

As he placed me on the cold metal bed, I sucked in a deep breath and watched the scanner move over me.

“It’s okay if you don’t want to stay here, but you can’t wander around like this without getting proper nourishment. Have you tried hunting for yourself before?” He sat down on the little chair at the corner of the room as I rearranged the clothes on me.

I shook my head. “I… I can’t shift. I can only catch small animals. I mostly have plants for my diet,” I admitted sheepishly.

“Fruits and vegetables are a necessary part of a human’s diet. But as a half-human, your body requires a high amount of protein to function like a wolf’s. It’s harder for half-breeds to shift and I hear it’s painful.”

I slipped down from the metal bed and stood around awkwardly.

“Next up, blood test,” he prompted.

I barely felt a pinch when the needle went in. And the process was over within no time.

He finally leaned back and looked over everything he had found out about me.

“I know you don’t want to talk about what happened to you, but I could see the condition of your body when I scanned it. I am a self-sufficient doctor in this pack. I know a hurt wolf when I see one,” he said calmly.

“Others might frown upon my approach, but in my professional opinion, you have had a hard time bringing yourself up in a hostile environment. I don’t know your story and I can see that you are not prepared to tell me. So, I won’t probe. But I really hope you will understand the dire situation you are in and give yourself a shot at a healthy life.”

I stared at him for a long time.

“Are you trying to convince me to stay here?” I whispered.

He shook his head. “I don’t want to convince you of everything. You are an adult who has lived alone for a considerable amount of time. You know what is good for you. I am telling you that you are severely unwell and you need to take care of your body in a peaceful environment. If this pack is that place for you or not is not my call. But you need to nurture your body before it goes beyond the chance of repair.”

It was a very long sentence for a man like him. He was definitely kind and trying his best to fill in the gaps and make me feel comfortable.

“I can’t settle down,” I told him truthfully after what seemed like ages of silence.

He looked peaceful in his seat, without a shred of judgment or expression to give away his thoughts.

He didn’t ask me for reasons, as if waiting for me to tell him whatever segment of my life I allowed myself to tell him.

“I will get caught,” I said quietly.

“That’s a good reason,” he admitted. “A good environment comes with people who will look after you and ensure that you are not harmed. I don’t know what or who is chasing you or why, but… think about it.” He tapped his pen on the pad. “What do you think?”

“I will consider it,” I said quietly, even though I knew I wouldn’t. There was no way I was staying.

“For now, you must be starving. I will ask someone on kitchen duty to bring you some bland porridge to eat.”

Porridge. It was something I had not had in a very long time. I nodded hesitantly, not sure if I should be eating at a foreign place where I knew no one. I found myself trusting this old face, but I also knew that the innocence and sense of safety would probably be my downfall.

He picked up the little landline on his desk and pressed on 9. He waited, his finger tapping, and then his eyes lightened slightly. “Who’s on kitchen duty today?” he spoke into the phone.

There was a moment of silence. “Excellent. Could you deliver some bland porridge? Put in a little meat in their too, yeah… make it really light.” He listened for a little longer before hanging up. He turned to me with a smile. “Your five-star meal will arrive soon. You can look around the room and familiarize yourself with the surroundings while I look over your tests, what do you think?”

I didn’t have an opinion on it. As long as I was facing someone who I had a semblance of beating, I felt a lot better.

As he concentrated on preparing the blood, I glanced around the room.

Starting from the anatomy charts on the walls to the model of organs beside his desk.

Finally, I looked over to the window on the other side of the room and slowly stood up and walked towards it. Sunlight streaked from the window, and I looked at it for the first time in a long time. I had not seen the unhindered sun for over a year. I hadn’t known I would miss it so.

My nose, though not as sensitive as full-blooded wolves, picked up on the scent of two people who seemed to be standing outside.

Curiosity got the best of me and I peered from the very corner to see the burly mean standing. Thankfully, they didn’t look like guards holding the fort. Instead, One was leaning against the wall of the cabin, while the other stood opposite him, talking about something.

Their voices were so low that I couldn’t hear them, but I saw the other man turn distinctly towards me and stare for a split second.

I scooted away immediately, a gasp escaping my lips. The man was the one I had spoken to earlier. I squeezed my eyes shut when I heard a loud bark of laughter and a mumbled ‘cute’ from his direction. 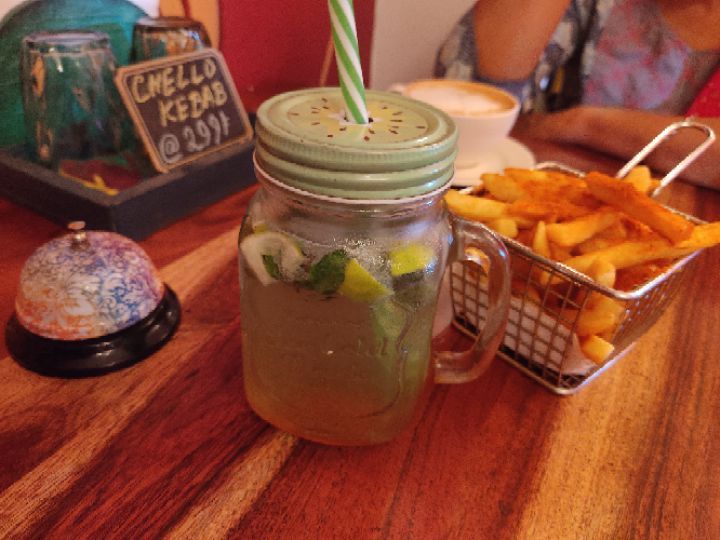 Back after a long time. I will be posting regularly from now on. One more chapter will be published today. In a short while. Don't forget to vote for this story. Let's dominate the ranks, okay?

| 7
Comments (2)
Melisa Reid
Sunscar9 will you write more about this couple. Where can I find more of your work ?